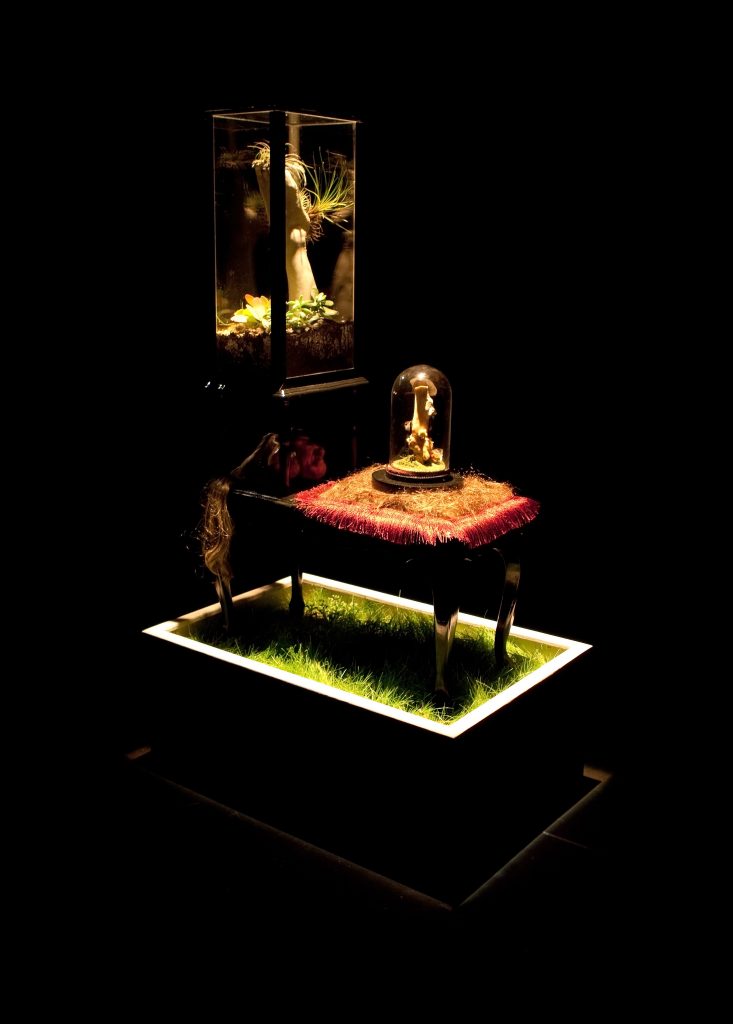 Mourning Story: Expectations, Absences and the Potentials for Self-Persistence is a mixed media exhibition by Tasmanian-based artist Svenja Kratz.  The exhibition forms part of an ongoing series of narrative artworks inspired by the artist’s experience of working with cell lines – genetically uniform cells that are considered immortal and can propagate almost indefinitely with appropriate maintenance.  In this instance, the potential of cell lines connects to Svenja’s personal experience of being a single and childless woman in the late stages of reproductive viability by considering avenues of producing alternative offspring via biotechnological intervention. This includes establishing an immortalised cell line from a large fibroid (benign tumour) growth in her uterus. By drawing together mixed-media works that reflect on death and the end of reproductive lineages and propose alternative figurations of motherhood and connection beyond species boundaries, the exhibition interrogates the human desire for immortality and the concept of genetic legacy. Social constructions of femininity and motherhood, experiences of uterine pathology and the medicalisation of the female body are also explored.

The exhibition was developed in consultation with art and science researcher Eliza Burke and features works produced in collaboration with picture frame scholar Anita Gowers. The production of works was supported by the School of Creative Arts at the University of Tasmania with expertise from Dr Phil Blacklow and Murray Antill.

Svenja Kratz a Tasmanian-based visual artist with a background in art and science. She completed a PhD in contemporary art and biotechnology at the Queensland University of Technology in 2014. During her study, she produced a range of works in response to biotechnological developments including cell and tissue culture and genetic engineering. Projects include: The Absence of Alice – a series of mixed media exhibitions originally inspired by the artist’s engagement with the Saos-2 bone cancer cell line, The Immortalisation of Kira and Rama – a living bioart display incorporating fetal calf cells and The Human Skin Experience/Equivalent Project – a jewellery participatory project involving tissue engineering practices. Since 2014, she has continued to develop her practice and produced work for national and international organisations including the Sydney Powerhouse Museum (2013) and Experimenta Recharge, 6th international triennial of media art (2014). Svenja’s most recent work, shown at the Science Gallery in London in 2019, was produced in collaboration with media artist Dr Bill Hart and regenerative medicine expert Prof. Dietmar Hutmacher. Creative works included a bioart momument and generative AI installation that examined immortality in the context of tissue engineering and anticipated mind uploading technologies. The exhibition at Rosny Barn extends this line of investigation to explore immortality from a feminist position drawing on the artist’s own experience of situational childlessness.